You are here: Home / Uncategorized / Congratulations to Our New Flying Scot Fleet Number 212 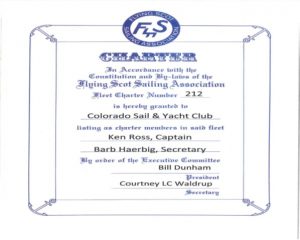 When Ken Ross came to the CSYC Board two years with the proposal to recruit and organize a new Flying Scot, no one could have imagine the success he would have in such a short time.  – Three Flying Scots racing on Wednesdays with more in the pipeline and now a charter with the Flying Scot Sailing Association

Congratulations to Captain Ken Ross of the Flying Scot Fleet #212 for a job well done!

We offer several different ways to get involved!

We offer yacht sailing on Wednesdays and Dingy racing Tuesdays - plus there is a simple membership if you are just interested in crewing aboard!