You are here: Home / PHRF A Fleet

The A Fleet is our PHRF fleet for boats with PHRF ratings less than 200 and typically spinnaker-equipped.  These tend to be racers or racer/cruisers, such as the C&C 30, Capri 25, Freedom F-240s, J/30, Merit 25, and Ranger 28.  At the start of each race series, the CSYC Race Director makes the final decision on which non-fleet boats are assigned into each PHRF fleet.

If you have any questions, you can send a note to PHRF A Fleet Captain at phrf-afleet@csyc.org

Here are some of the sailboats and skippers in our PHRF A Fleet: 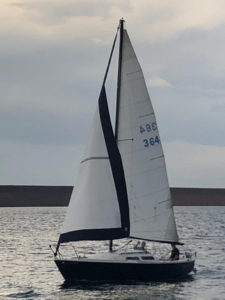 The Capri 25 Blue Boat is Tim and Martha Osborn’s third boat in the club. She joined A Fleet for the 2020 season and was named by their young children. Prior to buying Blue Boat, Tim and Martha built and raced an i550 named Bonaventure. But given their expanding family, they must have decided they needed more room, and moved up to a Capri 25. The Capri 25 is a fast boat and can compete well in A Fleet, especially in the hands of experienced sailors like Tim and Martha. 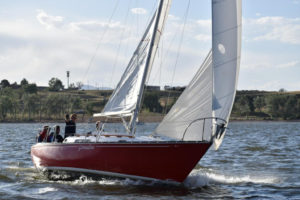 Grenadine is C&C 30 MK I hull #79, built in 1972.  Her owner and captain Randy Stafford, a Past Commodore of the club, brought her to Chatfield and CSYC in 2016.  She is crewed by his good friends.  A famously stiff boat that has crossed oceans, the C&C 30 really shines when the wind is up.  She can carry full sail controllably to 25 knots while other boats are reefing. Grenadine has been out on the lake multiple times in 50mph+ winds and has performed a couple of rescues in those conditions. She won CSYC’s annual Fugawi night race in 2019, 2020, and 2021.  When not racing, her accommodations are suitable for overnighting. 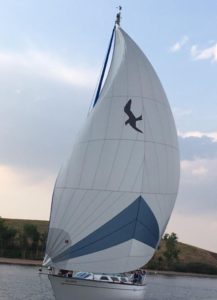 Night Hawk is a Ranger 28 whose keel was laid in 1976. She was brought to Chatfield and CSYC in 2019 by her owner and captain Dave Partridge, and moved up to A Fleet from B Fleet after her first year. Dave proceeded to start an arms race in A Fleet, by outfitting Night Hawk with a bowsprit and asymmetrical spinnaker on a top-down furler. Night Hawk has since attracted other former club boat owners on board as her crew, such as Larry Durham from Lone Ranger (a Ranger 26).  When Night Hawk unfurls that asym, she takes off like a rocket, as her 2020 results demonstrate. 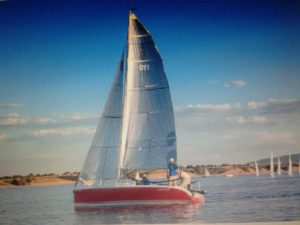 Sweetooth, a Polish Sasanka Majestic 24, rebranded an F240S in America, may be only one of two in the US. Registered in 2008, it was replaced in the European 730 class in 2010 except for one carbon fiber competitor built by Audi. Sweetooth sank in 2008, and suffered hull damage. She was given to her current owner and captain Richard O’Brien in 2010 for storage fees. Lying broken on the trailer covered by torn sails, she looked like a spring break refugee after a 7 day weekend. Richard fixed her up, and took her to many last place finishes until recent years. Did Richard mention she’s wicked fast sometimes?  She’s been clocked at over nine knots.

ZZZulu is a J/30 owned by Victoria Sailing School and raced by its instructors, particularly Trey Hegstrom. She’s the fastest boat in the club, if not on the entire lake, rating 156 seconds per nautical mile, and obviously has a knowledgeable crew. She is a serious threat in the A Fleet.